By 1949, China was at peace for the first time in approximately 10 years. The Communist Party had gained control and was under the leadership of Mao Zedong. Their long-term goal was to establish a socialist society, but many of their supporters simply wanted an honest government, land reform, social justice, and peace…not necessarily a classless society. 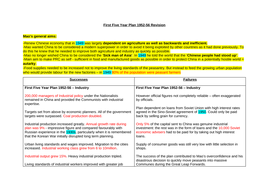 The new regime adopted a program called New Democracy that was designed to bring political and economic recovery. (This program was loosely based on Vladimir Lenin’s New Economic Policy used in the Soviet Union.) The Chinese leaders realized that the passage of time and proper instruction were essential to convincing the Chinese people that socialism was the best policy. In order to start the process, the government provided profit incentives to encourage productivity, began putting government regulations on privately owned companies, and redistributed land, much to the satisfaction of the peasants. In some ways, New Democracy proved to be a success. Over 65% of peasant households received lands, and thus were grateful to the new party. And while there were improvements in the economy, agricultural production was still slower than the sought-after goal. On the other hand, landlords and farmers lost property, freedoms, and in extreme cases, even their lives. Their deaths were viewed as necessary, as the Communist Party hoped to destroy the power of the gentry.

In 1953, Mao Zedong was ready to launch his First Five Year Plan. This plan, along with China’s version of Communism was influenced by the Soviet Union. Zedong brought 12,000 Soviet advisors to China and send Chinese students to study in Moscow. Chairman Mao believed that the Chinese economy must be adapted to focus on industry in order to promote modernization; however, it was difficult to focus on industrialization in a society made up largely of peasants. Thus began the process of collectivization; individual farms were combined to form large, collective, farm groups. Unlike Joseph Stalin’s use of compulsion, Mao chose to use persuasion. His land redistribution program had already gained the support of millions of rural Chinese citizens. Still, the First Five Year Plan did not result in an increase in production.

In his Next Five Year Plan, also known as the “Great Leap Forward,” Mao’s goal was to leap ahead of the United States and Britain in terms of agricultural and industrial output while leaping ahead of the Soviet Union in the quest for communism. He decided that the First Five Year Plan had been a mistake; the peasants were suffering because there was too much focus on China’s cities. The Great Leap was designed to shift that focus to China’s rural areas by establishing communes and moving all industry into the countrysides. Mao believed that this would be so successful that the citizens would have “meat three times a day.” These communes were self-supporting villages that usually housed 5,000 families. With their own industry, agriculture, schools, and militia, the Chinese who lived in these communes did life (eating, working, etc.) all together. Although he established a communal living situation throughout the Chinese countrysides, Mao did not believe that the nuclear family should be broken up. He encouraged families to have several children so that China would be able to take over the world as the population grew.

But there was one unexpected problem with the Great Leap Forward. Because everything was owned by the commune and there was no private property, everyone was taken care of…even if they did not work hard. Many people quit farming and working, leading to a drastic decline in agricultural production. Industrial production declined as well; huge factories cannot successfully be spread out in rural areas. The people responsible for working in the factories were not well trained, so many of the products were inferior and thus did not sell well on the world market. Combined with a year of terrible weather, these things would lead to disastrous results.

Though it would mostly be blamed on poor weather, China experienced a horrific famine that would decimate millions. While some were forced to eat bark and insects in order to survive, others turned to cannibalism, and still others died of starvation or violence. By late 1961, it was obvious that Mao’s Great Leap had been a great disaster. He stepped down from politics and decided to travel throughout Asia.

After touring southern and central China, Mao Zedong managed to gain followers and return to power. Most of his supporters came from unsatisfied youth and disappointed Communist party members; these supporters would be mobilized to form an army called the Red Guards. Mao decided that the best way to establish a communist state was by cleansing China of all capitalist tendencies. From 1966 to 1976, all schools in China were shut down as he sought to revamp the nation’s political, economic, and cultural system in an effort to reestablish his authority over the Chinese government. Rather than focusing on a gradual revolution, Mao believed that only an uninterrupted revolution could achieve the final stage of perfect communism. 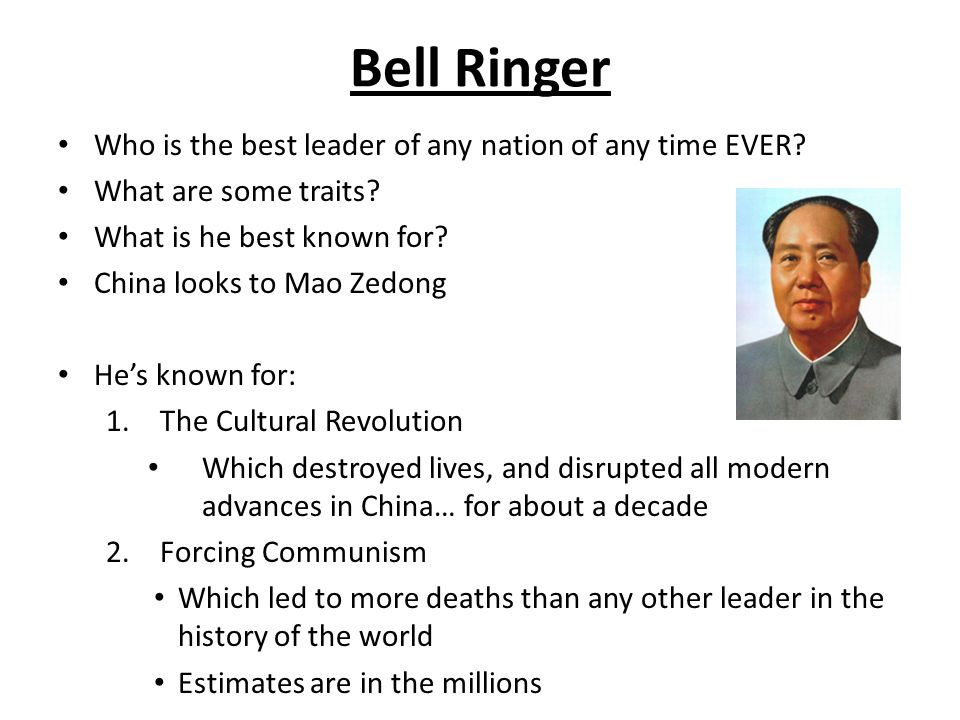 As part of his “Cultural Revolution,” Mao Zedong proposed that Chinese society should eliminate the “four olds”: old thought, old culture, old traditions, and old habits. These ideas were assembled and dispersed due to the publication of Zedong’s “Little Red Book.” Under Mao’s authority, the Red Guards set out to destroy the old way of life. Many temples and sculptures were destroyed and streets were given new names. The process of creating a new China was underway.

Like the Great Leap Forward, Mao’s Cultural Revolution produced widespread economic chaos. It also led to the deaths of more than two million people, including many scholars, intellectuals, and artists. By the early 1970s, the most violent years of the revolution had ended and Mao was elevated to a godlike status. Mao Zedong died at the age of 83 in September 1976. 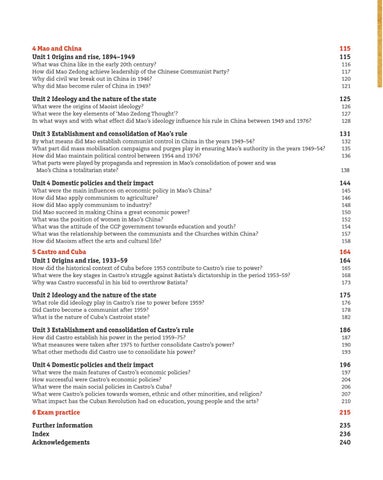 After a brief power struggle after Mao’s death, Deng Xiaoping seized power. Rather than eliminating the “four olds,” Xiaoping focused on the “Four Modernizations:” industry, agriculture, technology, and national defense. For more than twenty years, China had been isolated from technology around the world. Under Deng Xiaoping, the Chinese government tried to improve relations with the rest of the world. In addition to encouraging foreign investment, thousands of students were sent abroad to study capitalism.

By the late 1980s, more and more Chinese students were studying abroad and learning about Western culture. This increased contact with the outside world would lead to new knowledge being brought home. With that new knowledge cam increasing pressure for better living conditions and more freedoms. Most of the discontent was among Chinese students; others seemed to be reaping the benefits of the improving economy.

In May of 1989, student protestors gathered to call for an end to rising inflation and government corruption among other problems. These pro-democracy protestors had been camped in Beijing for several weeks. Although it was not the only protest of its time, the demonstration at Tiananmen Square had over one million people at one point. Finally on June 4, 1989, thousands of troops and 50 tanks rolled into the square and began firing on the demonstrators. The Tiananmen Square massacre ended with thousands of people dead and a democratic movement stifled.

Overall, Deng Xiaoping left China a more stable, more prosperous nation than it had been at any point in the 20th century, but incidents like the one at Tiananmen Square proved that China’s authoritarian government and one-party system were firmly in place.