Reg review Griffin Technology has been offering a nice line in Mac accessories for over ten years now, but it's only in the iPod era that its add-ons have become seriously cool. Its iTrip - a beautifully designed, AA battery-sized FM radio transmitter - has become one of the key accessories every iPod user should own.

But Griffin hasn't ignored the Mac - or, now the iPod is cross-platform, Windows machines - and radioShark sees the company bringing its new-found design savvy and product nous to the desktop.

The 'radio' part of the name gives away the device's function. As for 'shark', well, it's fin-shaped. You've got to sculpt a casing one way or another, and the curvy, 18cm high, 1.5cm thick fin is a darn sight more interesting to look at than an oblong box.

Oh, and 'radioShark' sounds a bit like 'radioShack', geddit?!?

Said fin is stylishly cast in shiny (great?) white iMac/iPod-friendly plastic, mounted on a shiny chrome base. Each side sports a cool-blue backlit wave design. The look may be iPod-inspired, but Griffin hasn't shown any less attention to detail. There's a rubber pad on the base, for instance, so it doesn't slide around or fall over. The unit has its own earphone socket and, best of all, it's bus-powered, so you only need one cable.

But the hardware's job is simply to look good and suck down signals - the real work is done by radioShark's desktop software. It has a suitable iTunes-esque brushed metal look with LED-style buttons on either side of the main tuner display.

The software will scan up and down the frequencies - both odd and even FM, ensuring support out of the box for North American and European stations - in the AM and FM bands. Or you can drag the slider to your chosen station's frequency if you know it. Any station can be saved as a preset. You have to add the name - alas there's no support for station ID data, but that's presumably because Europe and North America use different specifications, RDS and RDBS, respectively.

There's a ten-band equaliser too, but radioShark's real joy is its TiVo-style time-shift and scheduled recording features. Time-shifting, as anyone with a PVR knows, allows you to suspend live programming. radioShark starts recording as soon as you hit the Pause button. Push Play when the interruption's over, and you carry on listening from where you left off. Click the track-skip button and you'll zip straight to where the broadcast is really at.

You can buffer as much programming as you wish - it all depends on how much free hard drive space you have - and record to uncompressed AIFF or iTunes-friendly compressed AAC formats. It's simple and it works. Windows users' recordings are saved as WAV files. 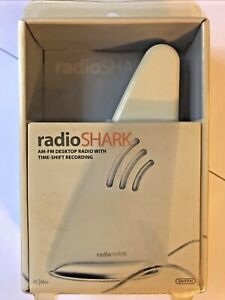 The same window provides a second pane, which lists and allows you to play recordings you've made, but you can play the files back in any other audio app if you wish. You can even add files to the list, including MP3s and AACs (non-DRM), if you care to.

My initial verdict of the radioShark was great looks, shame about the sound. Listening in on my PowerBook G4, the sound coming through the speakers was distorted, as if the device wasn't quite tuned into the station. Poor reception? Well, a Sony transistor radio right next to the radioShark tuned to exactly the same frequency sounded just fine.

But so did the fin when I plugged in a pair of earphones into its own audio port. The sound was great: crisp, clear and distortion free.

radioShark's other drawback is that appears to be a mono device - it doesn't pick up stereo broadcasts. Stereo reception requires a good, dedicated antenna, and it's obviously proved to tricky to build into the fin.

Update Griffin's UK distributor AM Micro tells me production units do provide stereo support, and only an initial batch of review models lack this feature.

There's no doubt radioShark offers better sound quality than web-based transmissions, and it's far better looking than any standalone receiver. A transistor radio would be cheaper, but you wouldn't get the timeshift and scheduled recording facilities, which earned their spurs keeping me up to date with the new Hitch-hikers' Guide to the Galaxy series.

The radioShark is now a firm fixture on my desktop. I can't wait for a digital edition. ®

When Griffin Technology announced the radioSHARK USB AM/FM radio earlier this year, many people were anxious to get their hands on one. After a long delay, it was finally ready for primetime. We had the chance to try one out, and overall, we’d have to agree.

Of course, things like XM and Sirius are the new buzzwords in radio, but AM and FM radio still have a large following. After all, they’re free, and there’s a lot of choices in most areas. The radioSHARK allows users to take their favorite local radio broadcasts, listen to them on their Mac, save them for later, or put them on their iPod.

The radioSHARK is a white plastic fin-shaped peripheral with blue LED “gills” to indicate power. They turn red when recording. A sturdy chrome base finishes off the excellent aesthetics.

Setup is relatively simple. After installing the software, the radioSHARK can be plugged into any free USB port.

The software is relatively plain, but functional. The brushed metal look is not the same as Apple’s, but something new, like Griffin’s Final Vinyl software. The interface itself looks a lot like any digital radio.

The Band button changes from FM to AM and back again. The Seek button looks across the spectrum for a strong station. The Rec button toggles recording for what you are listening to. Sched lets you create a scheduled recording, similar to the timer on many VCRs. EQ allows the adjustment of the graphic equalizer (the annoying car present is a nice touch). TS is the final button, and pulls-down the Time-Shift recording drawer. 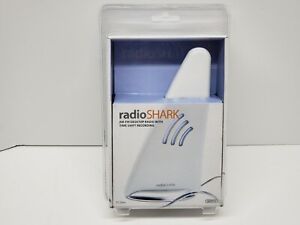 Presets can be added once a station is tuned. Simply pick “Add preset” from the pull-down menu and give your preset station a name (if you want a special name), otherwise the frequency will only be listed.

Scheduled recording is a simple task. After pressing the Sched button, one must simply pick the preset station to record from, the start and stop dates and times.

Time-Shift recording allows the replaying of live radio. Think of it as a caching or instant replay of whatever you are listening to. When enabled through the software’s preferences, Time-Shift saves the last :30 (or another amount) of audio on the hard drive for later retrieval.

Recording is either in AAC or AIFF format on the Mac, which enables you to transfer the files to many other audio programs. The Windows version records in WAV format. The radioSHARK software will export files directly into an iTunes playlist, if desired.

With the software being the main focus, the hardware is also important. The radioSHARK itself can be positioned to get the best reception. We found that coiling the included USB extension cable, as well as moving the radioSHARK away from our computer monstrosity improves reception.

A small jack on the back of the radioSHARK serves as dual duty for both earphones (the radioSHARK still provides audio to the jack when the computer is in sleep mode) and an external antenna (we didn’t have any to try).

Overall, the radioSHARK is an excellent product for anyone who listens to a lot of local radio programs and wants to put them on their computer or iPod. Obviously, the $70 price tag is not for everyone, but for those who will use the extra features of the software will find it worth the money.

The radioSHARK provides TiVo-like features for AM/FM radio listeners, and does a good job at it.

Pros: TiVo-like features for radio, audio can be transferred to iPod, excellent-designed hardware.

Cons: Software somewhat lame, and not as polished, but updates have improved it, reception lacking on some stations

This post has been filed in Reviews and Speakers/Audio
timopeanuhockpocidexckindgrosewat.co – 2021